No curfews, no lockdowns, no “stay at home”, no psychosis, no covid-calamities. There has been much talk about the Swedish corona strategy but the strategy of Nicaragua has been by far more successful, with many fewer deaths, no “economic rescue” for big banks and only limited damage to small and medium sized businesses.

In the midst of the worldwide economic debacle caused by covid hysteria, food self-sufficient, small business based, impoverished Nicaragua, has seen its exports grow over 10% the past 8 months because it did not shut down its economy.

Precisely because it sustained its economy, it has not had to take on huge loans in order to face the emergency.

Thus, its foreign debt levels remain within a readily manageable range, below 50% of GDP. (On the other hand, the economies of neighboring countries such as Costa Rica, El Salvador, Honduras and Guatemala, are hurting badly with debt levels soaring). 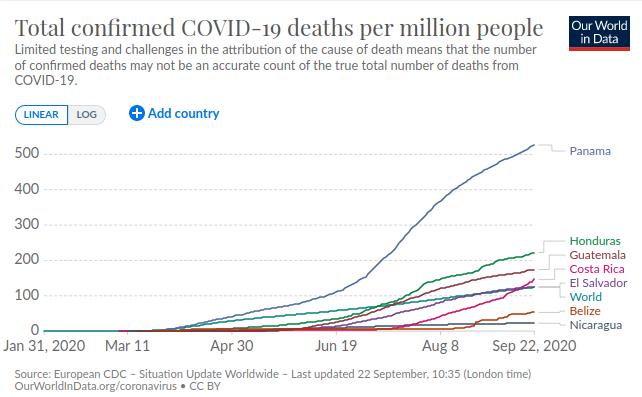 I went out on Sunday afternoon in the barrio where I live in Managua. Bars full of people, even small family-run restaurants full of guests. No masks. The local convenience store which still has the “only-masked-customers-allowed” sign hanging from the door no longer refuses to let maskless people in.

There is no mask-wearing official policy in Nicaragua except for a recomendation that only patients with respiratory conditions or personnel taking care of them should wear masks. The wearing of surgical gloves by patients, on the other hand, is strongly discouraged as it poses a serious risk of contagion both of coronavirus and other respiratory diseases.

In hospitals and health care units most people wear masks, be it out of precaution or out of plain courtesy. Otherwise, in offices and shops handwashing and alcohol hand sanitizers are readily available practically everywhere.

No restrictions have been put in place for public meetings and sports championships such as the popular local baseball league have taken place without problems, as well as scores of local fairs and other traditional activities that take place weekly.

Few massive activities have been cancelled due to covid, especially Catholic Church processions, most notably the traditional 10-day-long celebrations of Saint Dominic in Managua, for which thousands of people gather every year. For the most part, people have moved around, going out or heading to the beach as normal. Over the last 3 weeks, an all-time record number of over 83 thousand people visited the Salvador Allende Port and its lakeside promenade – a big and popular public leisure complex in Managua–, according to the authorities.

Schools haven’t closed down, which is very good for the country’s school children, since they provide a nutritious meal a day to 1.2 million children, a food security measure contributing greatly to improved public health for families across Nicaragua.

Yet, with just 2-3 covid-19 deaths per week the last couple of weeks (147 in total as of September 22nd), Nicaragua is by far the least affected country in Central America. Belice has only 19 deaths so far, but on the other hand, its population is a fraction of Nicaragua’s.

As in Germany and other countries, Nicaragua’s Health Ministery does differentiate between deaths of patients “with covid” and “from covid”. That is, a person can be with covid-19 but in the last instance die from an acute heart attack, while someone else who also has covid-19 can die “from covid-19” because of an upper lung condition typical of viruses that cause Severe Acute Respiratory Syndrome (SARS), such as SARS-CoV-2. That is the official explanation given by the authorities in a white paper on Nicaragua’s public health response to the pandemic issued last May.

Although increased mortality due to pneumonia has been noticed (last week, 26% fewer pneumonia cases were reported, but with an increase of 8% in deaths – related but not directly caused by covid), the situation in the hospitals, health care centers, funeral parlours and graveyards is totally normal. No collapse anywhere.

By the end of April and the beginning of May, when the majority of covid deaths were reported, many people lost acquaintances, relatives or friends with comorbidities, but not even back then did the situation reach the kinds of scenes taking place in other countries. The health system never came even close to saturation point at any time.

In the Western press Nicaragua has been portrayed as a country that “did nothing” to divert the pandemic, which is totally false. Very early on, on January 21st, while the wealthy countries of North America and Europe dallied, Nicaragua declared a national epidemiological alert. That was the day after the Chinese authorities reported that country’s third death from covid-19. Some weeks later, Nicaragua’s national covid response committee elaborated a detailed protocol based on strenghtening the public health system and informing the population on a mass scale.

The strategy followed by the Nicaraguan Government was based on informing the population, taking care of the elderly and frail and strengthening the public health system, specially via enhanced control of the many diseases already threatening the population such as zika, dengue, malaria and chikungunya. The ordinary public health campaigns never stopped, with fumigation of areas with high prevalence of mosquitoes as well as routine annual vaccination programmes for children and the elderly.

The population was recommended to intensify hygiene routines and those in the high-risk groups were recommended to avoid crowds. Every institution devised plans and protocols to meet the covid emergency and in industrial complexes such as the free trade zones plans were agreed between employers and the workers’ unions in order to ensure that any eventual interruptions to production would not leave working families without an income (luckily, as it turned out, for the most part production was not very seriously affected by the pandemic).

People with respiratory problems, cough and flu, are being given special attention and follow-up, to determine if they need further monitoring depending on their corresponding chronic condition: diabetes mellitus, chronic kidney disease, stroke, hypertensive disease, chronic obstructive pulmonary disease, pneumonia, among others.

A very successful initiative now being implemented is the program “My Hospital My Community” by which all public hospitals mobilize their specialized health care units out into their respective communities in order to actively reach out to people with various chronic conditions who for various reasons may have difficulties going to their local hospital –among them persons who are afraid of getting covid-19 if they go to a hospital.

As mentioned earlier, schools and universities have remained open because on-line distance learning is not an option for people on low incomes. However, because some parents were reluctant to send their children to school a specially designed series of television classes on all subjects have been produced and broadcast both on public television channels and on radio so that children could make good any classes they may have missed.

Facing the recurring risk of volcano eruptions, earthquakes, hurricanes as well as all the various kinds of tropical diseases, countries such as Nicaragua very much need to develop a routine system for early warning and management of emergencies, simply because those events are part of our everyday reality.

Nicaragua is among the countries most threatened by global warming and has been able to deal simply and readily with covid because since 2007 it has developed an integral civil defence and public health philosophy based on broad popular participation, a highly operational public sector and a system trained and ready to articulate cohesively all the available resources.

Whether addressing natural disasters or national public health challenges, Nicaragua over the years has built up an unrivalled organizational infrastructure that quickly mobilizes thousands of volunteer activists and public sector employees. So covid didn’t take the country unawares.

Amidst this development in a region cursed by neoliberalism, public health has played a central role in Sandinista policies. From the outset, privatization of health care was stopped and rolled back. A new, community and family-based preventive health model was developed using sector based territorial health areas grouping together communities of between 600 to 1,000 families, equivalent to 3,000 to 5,000 inhabitants, depending on whether the sector is rural or urban.

In each of these territories, so-called “cabinets for the family, community and life” have been organized incorporating socially-engaged members of society who effectively monitor the local health situation and are able to address not only sanitary and medical issues, but also the social aspects of public health, of particular importance.

For example, the program “Todos con Voz” (“Everyone with a Voice”) assesses the overall situation of each person with disability in a household and assists, not only with wheelchairs or therapies, but also with economic support and training in order to improve the economic activity available to the whole household.

The program “Amor para los más chiquitos” (“Love for the littlest ones”) promotes better care in the family for very young children. Other programs are aimed at helping poor families with children in school age so that they don’t have to send their children to work and so on.

The Sandinista government has built 18 new hospitals and there are plans to build 15 more, 6 of which are already under construction. The total health infrastructure of the country comprises 143 health centers; 1,333 medical posts; 178 maternity homes and 66 mobile clinics – way ahead per population of its Central American neighbors. 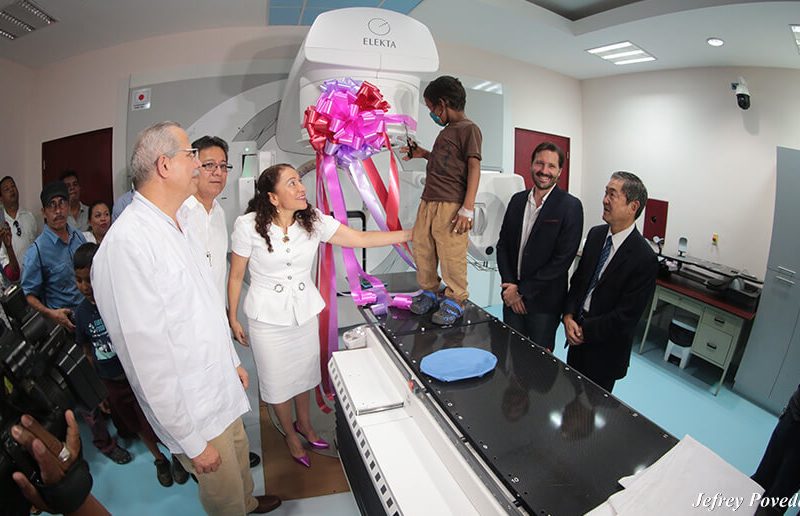 All this investment has a strong technological component as it shortens hospitalization periods, in many cases is much safer and makes more rational use of available health personnel. Among recent hi-tech investments are two linear accelerators to treat cancer (one of them has already been set in place, one is about to be installed) and the widespread use of laparoscopic surgeries and other modern techniques.

Recently, a molecular biology lab was inaugurated capable of analyzing evidence of several diseases, including COVID-19. This lab is the second most advanced in the region and has been recognized by the WHO as having Level 3 Biosafety.

Also, the Russian Mechnikov medicine factory was inaugurated, which can produce 12 million influenza vaccines per year. The Cuban drug Interferon Alpha-2B (successfully used to treat patients with COVID-19) is expected to be produced in this lab as well as the Russian Covid vaccine. 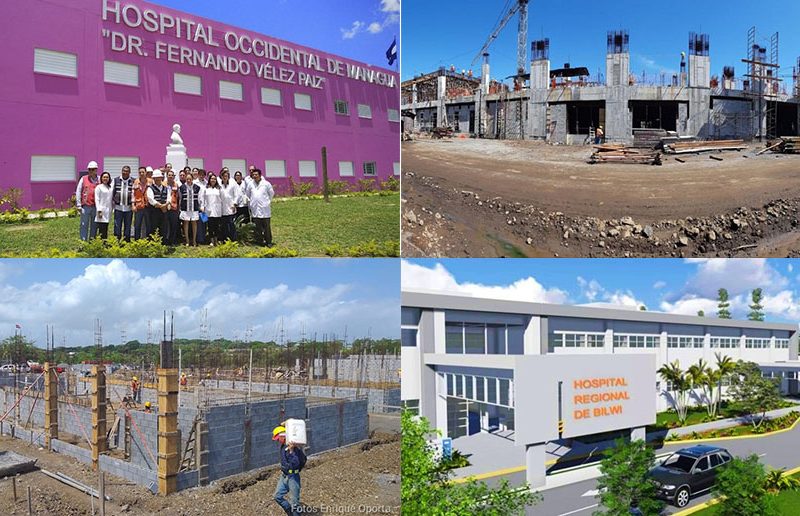 All this high-tech investment does not exclude the widespread use of traditional or natural medicine. A public health sector “Pain clinic” has been built to give treatment in acupuncture and many other traditional therapies, and specialists in those treatments are available in many health care facilities all over the country.

Nicaragua is a country where 80% of farmland holdings are under 875 acres, worked by small and medium sized producers. It is a country where small-scale family businesses drive the economy, controlling over 60% of disposable income, providing around 80% of the country’s employment and producing 90% of all the food it consumes.

So while it simply cannot afford to “lock down” or “stay home”, conversely it didn’t need to take “extraordinary measures” to face the covid emergency because it already had an immensely resilient system designed and in permanent readiness to face any and every kind of emergency.

For Nicaragua, the “blue pill” of lockdown or “stay at home” would have been pure cyanide, and since its leadership long ago took the red pill, it was able to discern the true interests behind the phony rich-country pandemic discourse and its hidden “great re-set” agenda.